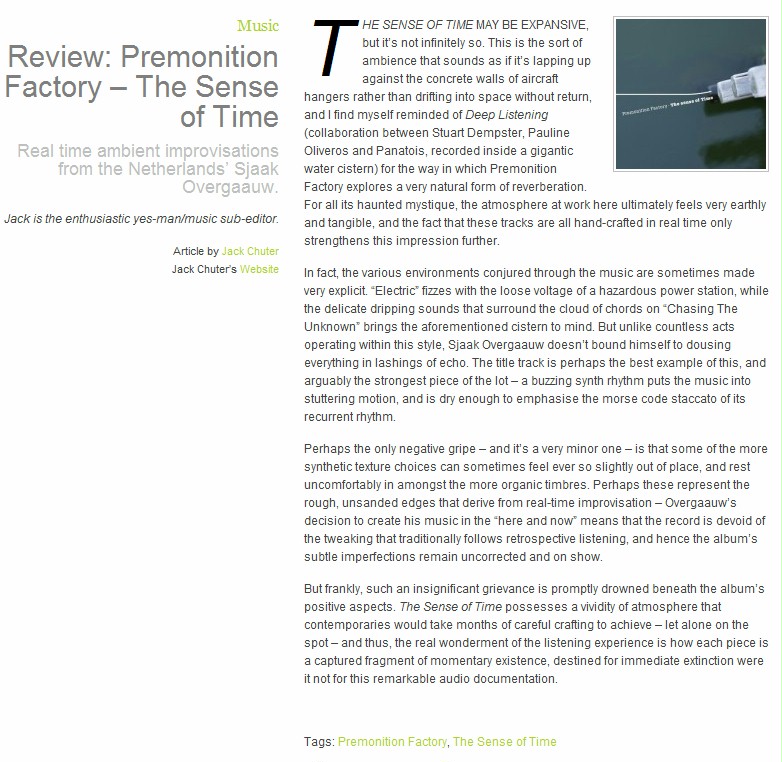 The Sense of Time may be expansive, but it’s not infinitely so. This is the sort of ambience that sounds as if it’s lapping up against the concrete walls of aircraft hangers rather than drifting into space without return, and I find myself reminded of Deep Listening (collaboration between Stuart Dempster, Pauline Oliveros and Panatois, recorded inside a gigantic water cistern) for the way in which Premonition Factory explores a very natural form of reverberation. For all its haunted mystique, the atmosphere at work here ultimately feels very earthly and tangible, and the fact that these tracks are all hand-crafted in real time only strengthens this impression further.

In fact, the various environments conjured through the music are sometimes made very explicit. “Electric” fizzes with the loose voltage of a hazardous power station, while the delicate dripping sounds that surround the cloud of chords on “Chasing The Unknown” brings the aforementioned cistern to mind. But unlike countless acts operating within this style, Sjaak Overgaauw doesn’t bound himself to dousing everything in lashings of echo. The title track is perhaps the best example of this, and arguably the strongest piece of the lot – a buzzing synth rhythm puts the music into stuttering motion, and is dry enough to emphasise the morse code staccato of its recurrent rhythm.

Perhaps the only negative gripe – and it’s a very minor one – is that some of the more synthetic texture choices can sometimes feel ever so slightly out of place, and rest uncomfortably in amongst the more organic timbres. Perhaps these represent the rough, unsanded edges that derive from real-time improvisation – Overgaauw’s decision to create his music in the “here and now” means that the record is devoid of the tweaking that traditionally follows retrospective listening, and hence the album’s subtle imperfections remain uncorrected and on show.

But frankly, such an insignificant grievance is promptly drowned beneath the album’s positive aspects. The Sense of Time possesses a vividity of atmosphere that contemporaries would take months of careful crafting to achieve – let alone on the spot – and thus, the real wonderment of the listening experience is how each piece is a captured fragment of momentary existence, destined for immediate extinction were it not for this remarkable audio documentation.